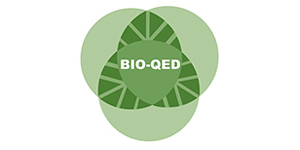 Opening new industrial routes for the production of important chemicals from renewable sources rather than traditional petrochemical sources: this, in summary, is the aim of the BIO-QED project, financed by the European Union as part of the Seventh Framework Programme, involving 10 partners from 6 European countries (Italy, Germany, France, the Netherlands, Croatia and Spain).

The project, which will last for 4 years, was officially launched on 1 January 2014. On 25 February Novamont hosted the initiative’s kick-off meeting, which was attended by all partners, leading companies from industry and European research, namely Fraunhofer Institut, Nova Institut, Cargill, Lubrizol, Rina, TNO, Miplast, Patentopolis and Mater-Biotech.

This project is funded by the European Commision’s Seventh Framework Programme for Research and Technological Development. Grant Agreement no. 613941.

This project is funded by the European Commision's Seventh Framework Programme for Research and Technological Development. Grant Agreement no. 613941